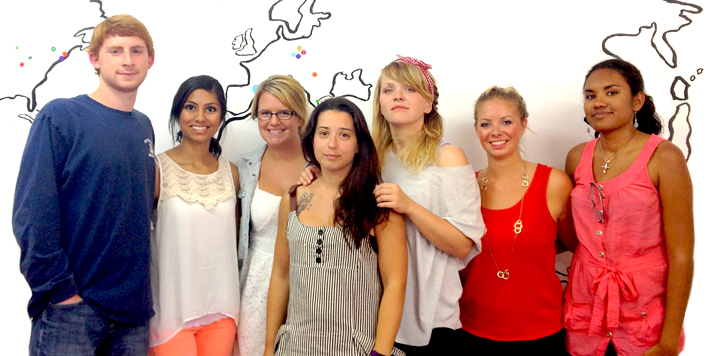 Smilemundo is a grass-root organization that was created thanks to the hard work and dedication of volunteers.  In its first year, 70 people from 10 countries came out to get it started, and we feel they deserve recognition.

Volunteers from around the globe who are skilled in various fields ranging from finance to journalism run Smilemundo under founder Aleksandra Zemke, a volunteer herself.  They create marketing plans, brainstorm Smilemundo’s catchy slogans, and work on designing attention-grabbing graphics.  All creative and business tasks are distributed amongst the volunteers.

It’s many of the volunteers’ first time in Europe, where they’re working in a multicultural office.  While working, they’re also absorbing multiple foreign cultures!  Smilemundo’s volunteers have come to Barcelona from Poland, Greece, Trinidad, India, Croatia and the United States- just to name a few.

Danielle Storms, one of the many volunteers from the United States, feels “surprisingly comfortable” in the office. “It’s awesome how everyone helps each other out”, Storms said.  “Lucky for me, my coworkers who’ve been around longer have taught me many little but helpful things, such as where to buy a cheap lunch and what museums are worth going to.”

Apoorva Kanneganti, a recent University of Minnesota graduate with degrees in finance and management information system, has been helping create a standardized process to help nonprofit organizations promote themselves through social and mass media.

“I’ve never worked in marketing before”, Kanneganti said. “I’m typically a numbers person, but working on something different provides a good perspective to see all aspects of a business.”  Kanneganti is also excited about learning the ins-and-outs of a nonprofit; she describes it as “its own niche not many people know much about.”

Even though Kanneganti is happy about having challenging projects at work, she’s not alone in saying Smilemundo’s diversity is her favorite thing about the organization.

Shanta Poon-King is doubling at Smilemundo as a member of the creative department and a translator.  A Spanish major from Trinidad and Tobago, Poon-King said: “It´s amazing and a great change [to be working in Barcelona] from a country with just a population of 1.2 million.”  Although she’s familiar with the prominent languages in the office, English and Spanish, she enjoys learning about the cultures and customs of her international coworkers.

According to Jessica Satterlee, who typically works on creative tasks such as creating slogans for Smilemundo, one of the benefits of working in such a diverse office is applying learned knowledge of foreign cultures to the business world.

“I benefit from working with a variety of people by learning how each culture uses the Internet and social media differently for advertising projects” Satterlee said.  It’s interesting for her to see how different cultures approach strategic marketing.

Anna Di Matera, who’s from Sicily (Italy), seemed to speak for all of the volunteers when she said: “I like Barcelona because it is a dynamic and multicultural city; here I feel like a citizen of the world. Working at Smilemundo, especially from another country, is an opportunity unlike any other. The job description entails incredible work experience with hands-on activities in addition to learning about multiple cultures”.

All of Smilemundo’s volunteers are incredible- we’re very thankful for them and their efforts!