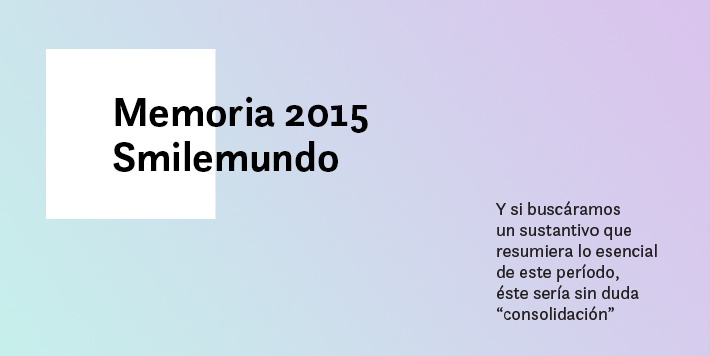 Inside the Transparency Portal of Smilemundo, we have just published the 2015 corporate memory, highlighting various works done during the period, as well as communicating openly about the status of the economic accounts for our association.

If we had to choose only two adjectives to describe how the year 2015 was for Smilemundo, we would highlight the words ‘stimulating’ and ‘meaningful’. These past few months, the vision and trajectory of the association has become clearer and more consolidated.

These descriptions of 2015 are due to the fact that we were primarily dedicated to expanding our star project, the interactive role play game SmileUrbo. We have been upgrading it and making it more accessible to the different publics for whom it is addressed.

In total about 300 new people from different fields including the third sector, education and the business sector all came into contact with the game. And thanks to its warm reception, we could enjoy games and presentations in different locations such as Spain, Poland, Germany, Brazil and Sri Lanka. A true delight!

Last year was also an intense year for Smilemundo regarding communication. We launched a new website, enhanced the traffic on social media networks (reaching 2000 ‘Likes’ on Facebook) and for the first time we took the pulse of the media, with close to 50 appearances in newspapers, online media and the radio.

Certainly it was a distinct year with many goals achieved, as well as the formation of new dreams. We shall keep you informed! 🙂

You can read the corporate memory of Smilemundo here